Vancouver, British Columbia, April 1, 2019 – BlueBird Battery Metals Inc. (TSXV: BATT; US:BBBMF) (the “Company” or “BlueBird”) is pleased to announce that it has entered into a binding letter of intent (“LOI”) to acquire 100% of the shares of Southern Lithium Pty Ltd (“Southern Lithium”), a private Australian corporation. Southern Lithium holds title to several tenements in Eastern Goldfields Region of Western Australia, an area with demonstrated potential for the discovery of economically viable lithium oxide.

Nav Dhaliwal, CEO of BlueBird, commented, “This strategic acquisition for BlueBird secures a highly-prospective land position within an emerging hard rock lithium district. With its stable pro-mining politics and straightforward permitting environment, Western Australia has emerged as a preferred source of high-quality lithium and tantalum supply.  We are excited by the scope of the opportunity before us. The district has been proven to host large-scale lithium mineralization associated with pegmatite structures. Several pegmatite targets have been mapped within the assembled tenements, none of which have been evaluated for lithium. That opportunity, combined with the well-established infrastructure throughout Western Australia, provides for a particularly compelling value proposition. We look forward to commencing exploration as soon as possible to prioritize targets for drilling.”

About the Southern Lithium Project and Pegmatite-Hosted Lithium

The Southern Lithium Project consists of nine granted exploration licences, three exploration licence applications and a granted prospecting licence with a total land area of 664 km2. Pegmatite swarms have been identified throughout the assembled tenements. Elsewhere in the region, similar pegmatite swarms are proven to host significant, economically viable lithium oxide mineralization including:

Initial exploration will focus on mapping, sampling and imaging of the known pegmatites to define drill targets for subsequent exploration. Geological mapping and sampling will provide a detailed understanding of the fractionation and composition of the pegmatites. Areas of interest will be initially tested by rock chip sampling and soil sampling, where relevant, to define the geochemical distribution of lithium-tantalum-tin minerals present. A combination of magnetics, gravity, radiometrics and thermal imaging will be utilized to further refine structure and geometry of the pegmatite sequences prior to drilling. 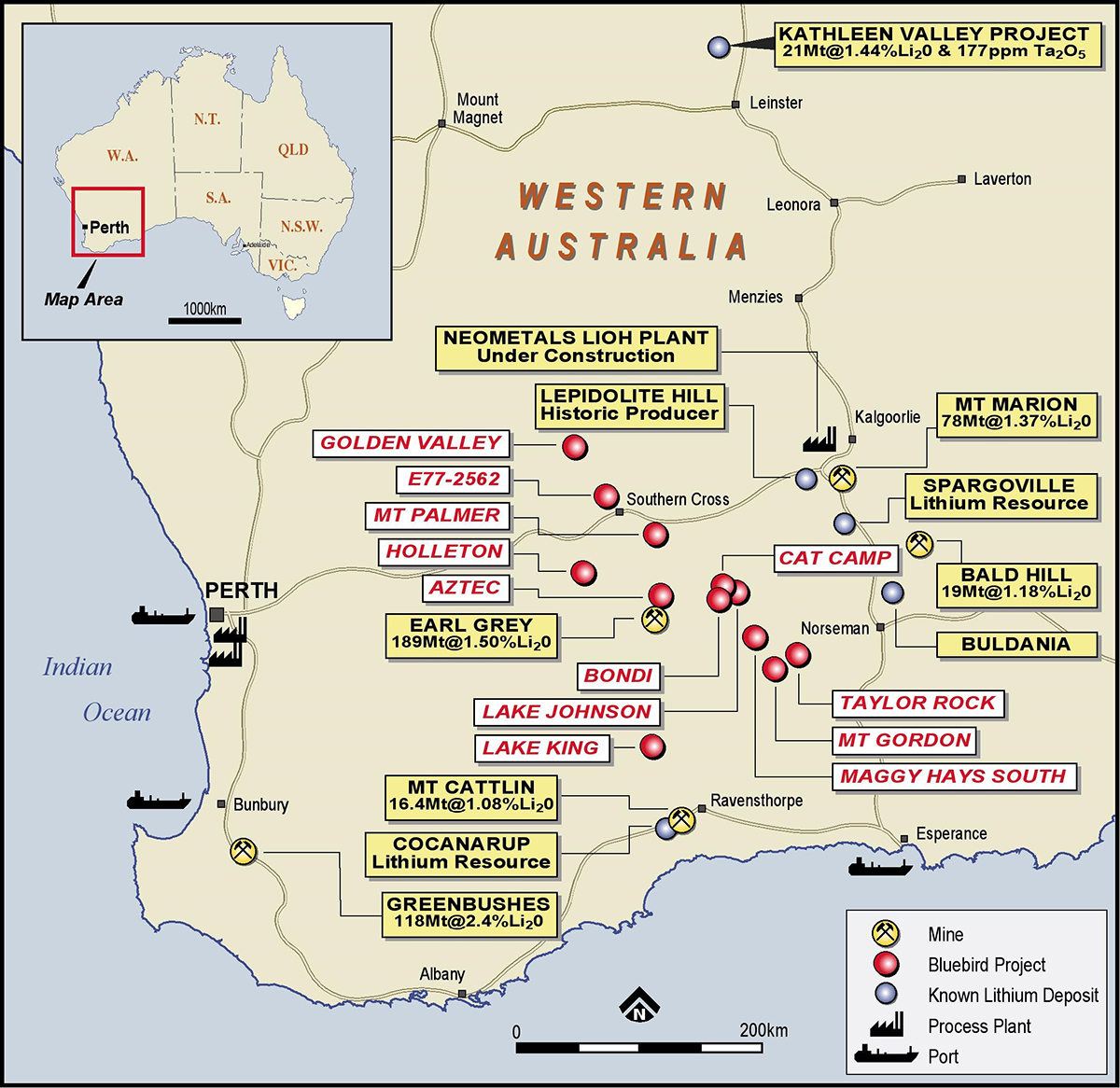 Under the terms of the LOI, which will be formalized by a definitive agreement, the Company will acquire a 100% interest in Southern Lithium by issuing common shares with an aggregate value of $2,500,000, based on a deemed issue price per share equal to the volume weighted average price (“VWAP”) of the Company’s shares on the TSX Venture Exchange for the 30 days prior to the date of issue, subject to a minimum price of the discounted market price of the Company’s shares on the day immediately preceding the date of the announcement of this transaction (“Minimum Price”).

If within four years of closing, BlueBird delineates and publicly announces an inferred resource of a minimum of 15,000,000 tonnes at a grade of greater than 1% Li2O from the Southern Lithium Project, an additional $1,500,000 of common shares of BlueBird will be issued based on a deemed issue price per share equal to the VWAP of the Company’s shares on the TSX Venture Exchange for the 30 days prior to the date of issue, subject to the Minimum Price.

If within four years of closing, BlueBird announces the execution of an off-take agreement for the sale of a minimum of 200,000 tonnes of concentrate at a minimum grade of 5% Li2O from the Southern Lithium Project or a minimum of 500,000 tonnes of ore at a concentrate grade of greater than 1.2% Li2O, an additional $1,000,000 of common shares of BlueBird will be issued based on a deemed issue price per share equal to the VWAP of the Company’s shares on the TSX Venture Exchange for the 30 days prior to the date of issue, subject to the Minimum Price.

A net smelter royalty of 2.5% will apply to all minerals sold from the Southern Lithium Project.

About Lithium in Western Australia

Lithium mineralization was first recognized on a significant scale at the Greenbushes Mine which initially focused on the exploitation of tin-tantalum mineralization. With the increasing utilization and strong projected demand for lithium ion batteries, exploration across Western Australia initially targeted former, pegmatite hosted, tin-tantalum operations to evaluate the potential to host economically significant lithium deposits. This approach was adopted by explorers throughout Western Australia leading to the discovery of numerous, pegmatite hosted, lithium oxide deposits.

The table below summarizes the most significant lithium discoveries associated with pegmatites in Western Australia and is provided for reference only. There are no assurances that BlueBird will achieve similar results or that the Southern Lithium Project, or any portion of it, will become a producing mine.

In the past decade, six new lithium mining operations have attained commercial production from lithium oxide mineralization associated with pegmatites throughout Western Australia. Three new lithium refineries are being either proposed or currently being constructed in Western Australia as the area becomes an increasingly important source of global lithium production. Historical exploration for gold and base metals has identified large, Archaean aged greenstone belts hosting large pegmatite bodies that are untested for lithium mineralization and therefore represent a compelling exploration opportunity.

Lithium oxide from hard rock sources offers reduced development costs and faster production timelines than other sources of lithium. This is a great advantage over lithium brine exploration and bankable feasibility cost.

The technical content of this news release has been reviewed and approved Wes Hanson, P.Geo., a director of the Company and a Qualified Person pursuant to National Instrument 43-101. The qualified person has not yet visited the Southern Lithium Projects, and therefore has not yet verified the data disclosed, including sampling, analytical, and test data underlying the information or opinions contained in the written disclosure.

BlueBird Battery Metals (TSXV: BATT; US: BBBMF) owns a strong, prospective portfolio of battery metal projects in a stable, low-risk jurisdiction. The Company is led by an experienced team and is aggressively advancing its assets, which collectively host copper, cobalt, lithium, nickel, and vanadium mineralization. BlueBird is pursuing a business model that delivers direct and long-term leverage to the price appreciation in nickel, lithium and cobalt, three principal materials in EV and energy storage batteries. The battery metal sector is overly-reliant on high-risk mining jurisdictions such as the DRC, the Philippines and South America and this has created a vulnerable supply chain. In contrast, the Company plans to become a leader in the battery metals sector by advancing its portfolio in Western Australia, a growing hub of battery metal production, while also reviewing new acquisition opportunities.

On Behalf of the Board of BlueBird Battery Metals Inc.