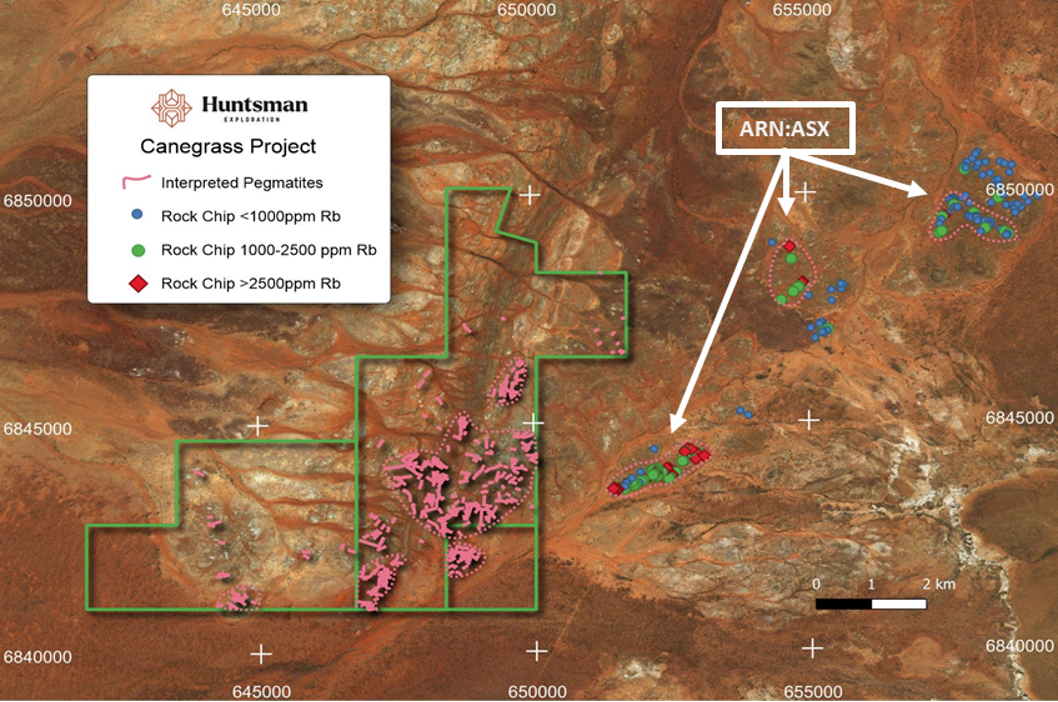 Vancouver, British Columbia, December 20, 2022 – Huntsman Exploration Inc. (TSXV: HMAN; US: BBBMF) (the “Company” or “Huntsman”) is pleased to announce the results of the exploration targeting program completed across the Canegrass Project located in Western Australia.  Recent exploration success by Aldoro Resources Ltd (ASX:ARN) on their Wyemandoo Project, located adjacent to Canegrass the east, has provided the catalyst for Huntsman to evaluate the LCT pegmatite potential of the Project.

A satellite imagery-based interpretation was conducted across the entirety of the Canegrass Project and revealed extensive swarms of what is being interpreted as pegmatites.  These interpreted pegmatites are located within the same lithologies and setting as that at Aldoro’s Project.  Furthermore, rock chip sampling conducted by Aldoro has confirmed the presence of high grade rubidium with associated lithium mineralisation 1,400 m to the east of the Canegrass Project.

Field crews have been appointed and are ready to commence ground truthing, mapping and geochemical sampling of the priority targets in January 2023.  The field mapping and sampling program aims to validate the satellite imagery targets and to ascertain the chemistry of the pegmatites at surface.  The results of the field-based program are expected in late February to early March, 2023.

President and CEO Scott Patrizi, commented, “The identification of such a substantial swarm of pegmatites proximal to a known LCT type pegmatite system is particularly encouraging.  With such a priority target, we have expedited the field evaluation and look forward to providing further updates with respect to the mineralisation potential of the Project.”

Tenement E59/2119 covers an area of over 26 km2 extending over part of the Windimurra Igneous Complex, a large differentiated layered ultramafic to mafic intrusion emplaced within the Yilgarn craton of Western Australia.  It is conical to a sheet-like body intruded into the Archaean granite-greenstone terrain of the Murchison Province.  It outcrops over an area of approximately 2500 km2 and has an age of approximately 2800 Ma.  The complex is dominantly comprised of basic cumulate rocks that can broadly be classified as gabbroic in composition.  Magmatic layering dips inwards at the margins and flattens in the centre.  It is dissected by large scale strike-slip shear zones so that the original extent of the complex is unknown.  The Windimurra Igneous Complex is part of a much larger suite of similarly layered ultramafic to mafic bodies emplaced between 2700-2800 Ma across the Murchison Province.  Collectively, these complexes are similar in thickness, volume, and composition to the Bushveld Igneous Complex of South Africa.

The Project is predominately underlain by the lower zone of the Windimurra Intrusive Complex, a series of olivine-rich gabbro and gabbronorite which grade upwards into more leucocratic gabbroic rocks. The Lower zone is separated into a western and eastern lobe by the Shephards Discordant Zone (SDZ), which represents a significant break in the igneous stratigraphy and is characterised by magnetite and magnetite-bearing gabbro. To the east of the SDZ lies a package of mafic volcanic rocks, felsic volcaniclastic sandstones, and banded iron-formation bounded by the Wyemandoo Shear Zone and are part of the Norie Group.

The technical content of this news release with respect to Canegrass has been reviewed and approved by Nathan Tribble, P.Geo., a director of the Company and a Qualified Person pursuant to National Instrument 43-101. The qualified person has not yet visited the Canegrass Project and therefore has not yet verified the data disclosed, including sampling, analytical, and test data underlying the information or opinions contained in the written disclosure.

On Behalf of the Board of Huntsman Exploration Inc.

Although we believe that the expectations in our forward-looking statements are reasonable, actual results may vary, and we cannot guarantee future results, levels of activity, performance or achievements