Vancouver, British Columbia, December 13, 2021 – Huntsman Exploration Inc. (TSXV: HMAN; US: BBBMF) (the “Company” or “Huntsman”) is pleased to announce its revised exploration strategy for 2022. Due to the strong resurgence of the nickel price together with improving fundamentals for battery metals, the board has determined that it will continue to focus its exploration efforts on the Company’s wholly owned Canegrass Nickel Project in Western Australia in the immediate future.

Scott Patrizi, President and CEO commented, “Recent results from both the 2018 and 2020 exploration programs at the Canegrass Nickel project have demonstrated the exceptional prospectivity of this project and its potential to host a world class nickel discovery. The project itself sits in the heart of Western Australia’s majors mining hubs, remains easily accessible year-round and has access to all the required infrastructure.

Huntsman together with our technical team and consultants at Newexco have demonstrated a proven exploration strategy in the use of MLEM and FLEM which has generated exceptional outcomes on the limited drilling we have done to date. Our plan for 2022 is to simply expand on our existing knowledge and replicate the success we have had in the past in the hope of delineating a new major nickel resource.

The technical team we have on the ground in Australia in Newexco have a track record of discovering some of the largest most profitable nickel discoveries in Australia. I am very excited to see the results of the upcoming program.”

The Canegrass Property is situated in the Windimurra Intrusive Complex within a favourable geological setting with multiple mineralised horizons in favourable host rock. The mineralisation is open along strike and at depth with extensional drilling also planned to test down plunge exploration potential.

The recent MLEM and FLEM surveys confirmed the previously known VTEM anomalies flown by previous operators and identified some new areas of interest. Drilling of select VTEM targets by Huntsman resulted in sulphide intersections in each hole confirming the use of geophysics as the primary exploration tool in target identification (Figure 1).

Drilling to date has been very encouraging with multiple high-grade nickel, copper and PGE mineralisation encountered across several prospects (Figure 2). The Company now plans to assess the significant exploration potential of the prospective stratigraphy that extends in a north-south strike trend of ~9.0 km. Several known Australian nickel sulphide producing deposits have been discovered by following mineralisation that ultimately led to a feeder system that formed the bulk of those deposits.

At Tulloch, multiple mineralised horizons in favourable host rocks were identified during the recent drilling in 2018 and 2020. The Company has now extended the mineralised zone to over 200 m with the deposit remaining open downdip and along strike.

Several other potential prospects have already been defined for further evaluation including but not limited to Tobin Bronze and Sunline.

A review of the PGE potential within the current tenure is also warranted. 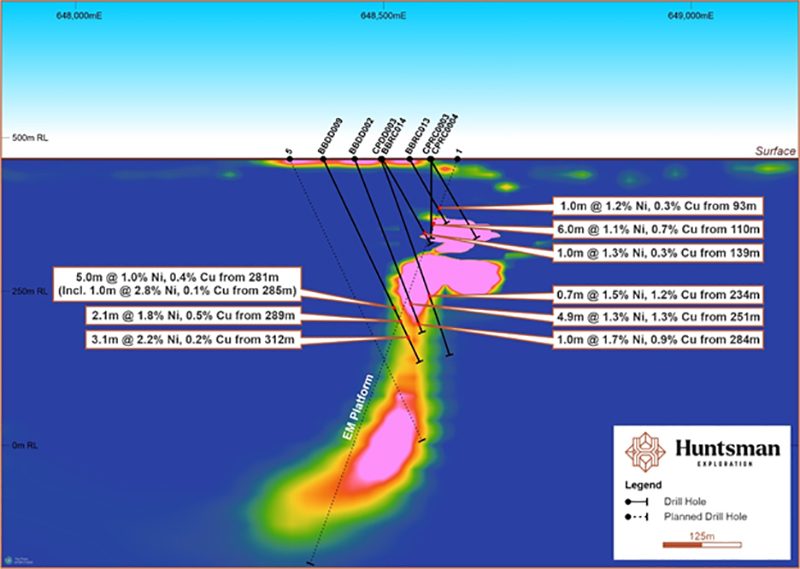 The Tenement E59/2119 covers an area of over 39 km2 extending over part of the Windimurra Igneous Complex. The geology is dominated by the Windimurra Igneous Complex, a large differentiated layered ultramafic to mafic intrusion emplaced within the Yilgarn craton of Western Australia. It is conical to a sheet-like body intruded into the Archaean granite-greenstone terrain of the Murchison Province. It outcrops over an area of approximately 2,500 km2 and has an age of approximately 2,800 Ma.  The complex is dominantly comprised of basic cumulate rocks that can broadly be classified as gabbroic in composition. Magmatic layering dips inwards at the margins and flattens in the centre. It is dissected by large scale strike-slip shear zones so that the original extent of the complex is unknown. The Windimurra Igneous Complex is part of a much larger suite of similarly layered ultramafic to mafic bodies emplaced between 2,700-2,800 Ma across the Murchison Province. Collectively, these complexes are similar in thickness, volume, and composition to the Bushveld Igneous Complex of South Africa.

The Canegrass Project is predominately underlain by the lower zone of the Windimurra Intrusive Complex, a series of olivine-rich gabbros and gabbronorites which grade upwards into more leucocratic gabbroic rocks. The lower zone is separated into a western and eastern lobe by the Shephards Discordant Zone (SDZ), which represents a significant break in the igneous stratigraphy and is characterised by magnetite and magnetite-bearing gabbro. To the east of the SDZ lies a package of mafic volcanic rocks, felsic volcaniclastic sandstones, and banded iron-formation bounded by the Wyemandoo Shear Zone and part of the Norie Group. In the southwest of the Tenement is the Corner Well Gabbro, a late phase of peridotitic–gabbroic pipes, 0.3 – 2 km in diameter, which intrudes into the lower zone of the western lobe of the Complex.

The geological complex at the Canegrass has only been explored approximately 15% of the total 7 km strike length of the mineralized shear zone. The potential exists for the current zones to be connected along strike and at depth.

The technical content of this news release with respect to Canegrass has been reviewed and approved by Nathan Tribble, P.Geo., a director of the Company and a Qualified Person pursuant to National Instrument 43-101. The qualified person has not yet visited the Canegrass Project and therefore has not yet verified the data disclosed, including sampling, analytical, and test data underlying the information or opinions contained in the written disclosure.

On Behalf of the Board of Huntsman Exploration Inc.